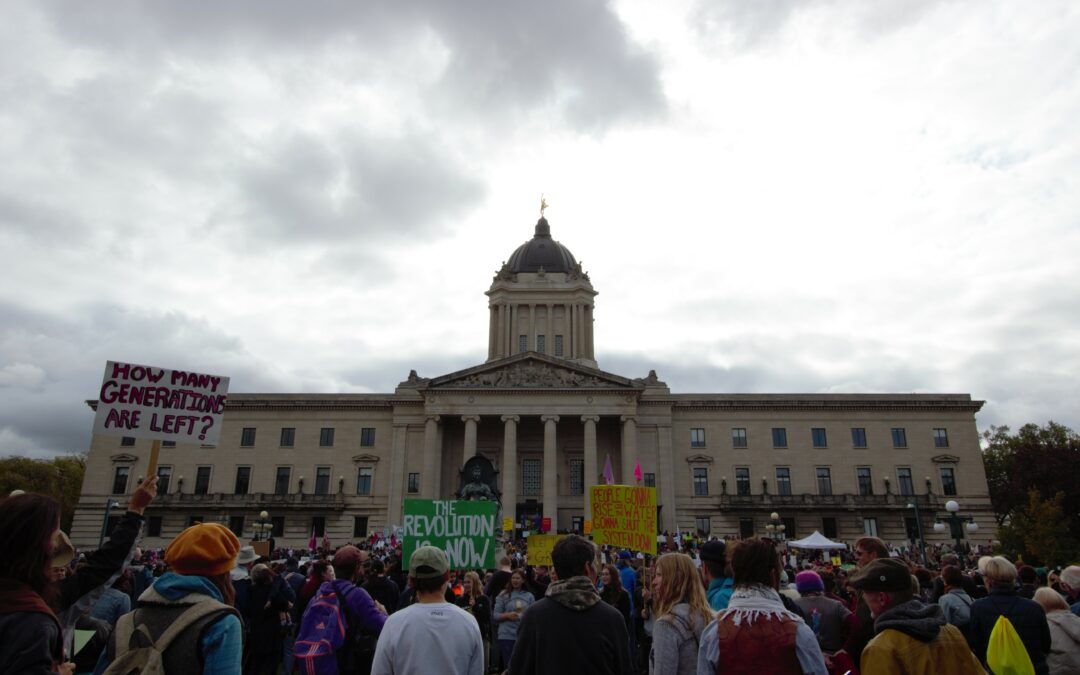 Written By: Hannah Muhajarine
As published in the Winnipeg Free Press, December 1st, 2022

All governments must heed the dire warnings from United Nations scientists calling for action on climate.

The Manitoba government’s Made in Manitoba Climate and Green Plan aims to make our province the “cleanest, greenest, and most climate resilient,” but Manitoba is now the only province (other than Alberta) with higher emissions now than in 2005.

In response to provincial inaction on climate, a coalition of local climate and policy experts drafted Manitoba’s Road to Resilience: A Community Climate Action Pathway to a Fossil Fuel Free Future. The plan shows how actions to decrease emissions have the potential to bring many benefits to Manitobans by saving households money and creating thousands of new jobs.

While evidence-based action is available, we still depend on the provincial government to set it in motion. Unfortunately, the throne speech delivered earlier this month signals only further inaction.

One of the few places the climate transition is mentioned in the throne speech concerns mining expansion.

But this is deceptive, because this expansion is not strategically limited to lithium or other materials necessary for the transition off fossil fuels. Particularly in the absence of other meaningful actions on the part of the province, this celebration of mining as a factor in the climate transition rings false.

Elsewhere in the speech, the province seeks to blame the federal government for the rising cost of living. However, the truth is that under the federal carbon tax scheme, the majority of Manitoba families receive more money back than they pay.

If the province is interested in escaping federal carbon pricing, the Road to Resilience document describes exactly how Manitoba could design its own pricing scheme that increases revenue by closing loopholes for polluters.

That revenue could be directed toward pay-as-you-save programs to help Manitobans increase the energy efficiency of our homes, switch off of fossil (natural) gas to geothermal heating and purchase electric vehicles.

Provincial support to install rooftop and ground-mounted solar panels would provide households and businesses with another source of cheap, local electricity.

Transportation creates the most emissions per sector here in Manitoba, and gas prices are another rising cost. Still, the province has few solutions to offer beyond promising to support the development of Winnipeg’s Transportation Master Plan.

This is after years of leaving millions in federal funding for municipal public transit on the table, a situation that was only rectified in the last year.

The throne speech does not acknowledge transportation issues outside of Winnipeg, even though four years after the loss of Greyhound, intra-provincial public transportation options remain patchy or non-existent.

The Road to Resilience recommends that the province create a publicly funded intra-provincial public transit service, which would make it easier for rural Manitobans to access essential services while reducing gas costs and transportation emissions. Support for transit systems in Brandon, Thompson and other municipalities is also required.

The province says in the throne speech that it will support the development of training and education opportunities to address labour shortages, specifically highlighting the manufacturing sector and skilled trades. These are sectors that will grow a great deal during the climate transition, though that is not mentioned.

Manitoban workers need to be trained for the green economy, making sure these opportunities are designed to be affordable and accessible for all.

When it comes to growing the green economy, the province signals it will continue to pour money into the private sector; however, the accountability back to public goals is weak.

Public corporations are better positioned to lead the systematic and quick transition we need, while making better use of public dollars.

The Road to Resilience envisions a new Crown corporation to lead the transition of homes to geothermal, while creating thousands of well-paying public jobs and improving demand-side management via the existing Crown corporation Efficiency Manitoba.

To prepare Manitoba for the near future, we need a co-ordinated climate-first approach from our provincial government, in which tangible climate solutions are central to the agenda.

Manitoba’s Road to Resilience offers specific solutions to reduce our emissions while making life more affordable, ensuring decent and well-paying jobs for thousands of Manitobans while also strengthening our economy.

As we enter an election year, Manitobans will be looking for provincial leadership willing to make such solutions a reality.