International Disappointment Parties: COP vs. the Road to Resilience 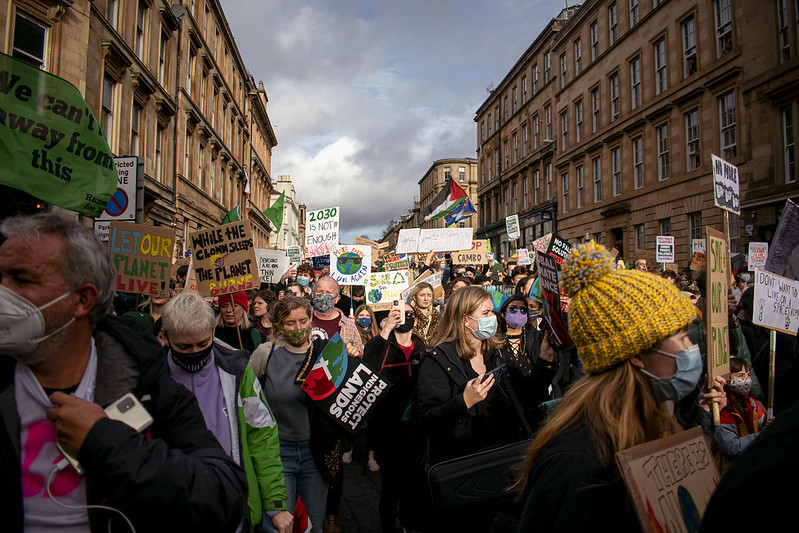 Representatives from around the world converged in Glasgow for COP26 in November (after being delayed one year due to the global pandemic), to check in again on who’s responsible for stopping climate change. I’m going to go ahead and spoil the main outcome right now: we’re still not on track to keep within 1.5 degrees of warming, despite that now being the promised target in the new Glasgow Agreement. It’s easy to be cynical or indifferent to COP, especially when the fossil fuel sector has a bigger “delegation” than any single country, and/or you don’t have a particularly strong opinion about 5-year common timeframes or the Global Stocktake, for example.

That being said, we think it’s important to know whether world leaders’ promises are taking us down the “road to resilience” or the road to hell in an EV. So I’ve poured through the statements, the frameworks, the articles, and the declarations, and I’ve identified some (non-exhaustive) highlights of what went down. And not only that—I’ve also cobbled together some (non-exhaustive) examples of how the commitments at COP line up with Climate Action Team’s recommendations for Manitoba. Read on for this non-exhaustive (but still over the recommended word limit) exploration of COP v. R2R.

The 2015 Paris Agreement had set a goal of limiting warming to 2 degrees, “aiming” to keep it closer to 1.5. But in the Glasgow Agreement, countries agreed to a 1.5 degree target. This is good, except for the aforementioned issue that current emission reduction targets (or nationally determined contributions (NDCs)) do not actually keep us within 1.5. Even with the new NDCs announced at COP26, we are still on track for 2.1-2.4 degrees global temperature rise by 2100. In her opening speech, Mia Mottley, the prime minister of Barbados, called any warming over 2 degrees “a death sentence.”

In order to keep warming within 1.5 (we are already at 1.1), we must, according to the IPCC, achieve net-zero emissions globally by 2050, and a 45% reduction globally below 2010 levels by 2030. These are the targets used by the Road to Resilience.

Canada has set a goal of net-zero by 2050, and earlier last year, the federal government set a new 2030 target of 40-45% below 2005 levels by 2030. However, at the end of COP26, countries were instructed to revise their NDCs before COP27 to make them consistent with 1.5 degrees, which means that Canada will have to revise its 2030 target again. Because of the very-cool fact that Canada is the worst emitter on a per capita basis in the world, and is historically responsible for 65.5 billion tonnes of carbon emissions since 1850, analysts have calculated that a 60 percent reduction would be closer to doing our fair share.

Some of Canada’s commitments’ outcomes:

We’ll explore some additional commitments on Canada’s part below.

COP26 vs Manitoba’s Road to Resilience

The Road to Resilience includes sections on buildings, food, transportation, energy, natural spaces, and climate justice. Here’s how Canada’s COP commitments connect to some of those areas.

Canada signed on to the Global Methane Pledge, which asks countries to cut their methane emissions by 30% over 2020-2030.

In Manitoba, methane emissions are linked to our use of natural gas for heating (as well as animal agriculture, fertilizer, and organic waste). A great way to reduce methane leaks would be to stop using natural gas altogether. Here’s how the Road to Resilience says we could do it:

Hydropower expansion was being touted at COP26 by groups such as the International Hydropower Association as a way to reach net-zero goals. But the declaration expresses concern over climate finance dollars being channeled towards hydropower versus other renewable sources of energy that may have fewer social and environmental costs. A separate statement from a group of UN rapporteurs also drew attention to the human impacts of dams.

Manitoba’s hydropower is the main reason our emissions are relatively low compared across all the Canadian provinces. But these dams have destroyed ecosystems and flooded traditional lands, with little consultation with or compensation to Indigenous communities. Manitoba’s transition should be based on investing in new forms of renewable electricity such as solar and wind, ensuring that this development takes place as much as possible through public, co-operative, and community ownership and oversight.

Canada joined a coalition of countries, cities, car manufacturers and other organizations at COP26 pledging to  “work towards all sales of new cars and vans being zero emission…globally by 2040 and by no later than 2035 in leading markets.”

Transportation produces the most emissions compared to any other sector in Manitoba. Here are some measures that would help encourage the shift towards zero emission vehicles:

However, focusing on improving public transit would be a more efficient approach to reducing emissions, while also making transportation easier and more affordable for the majority of people:

Canada, along with 130 other countries, signed the Glasgow Leaders’ Declaration on Forests and Land use, promising to “wor[k] collectively to halt and reverse forest loss and land degradation by 2030.”

Protecting and restoring forests, and other ecosystems, is the best way to reduce atmospheric CO2 concentrations, which we must also do in order to keep below 1.5 degrees.

To support Canada’s pledge to reverse forest loss, Manitoba could:

Let’s also not forget that the Canadian government continues to build the TransMountain pipeline, and to send in the RCMP to protect corporate interests and force the construction of the Coastal GasLink pipeline through Wet’suwet’en territory. In a statement on COP, Assembly of Manitoba Chiefs leader Arlen Dumas pointed out that while Trudeau is making promises, “First Nations have been criminalized for simply protecting their land and fulfilling their duty.”

While the fossil fuel sector was well-represented at COP, many from the Global South were not able to travel to Glasgow due to lack of vaccine access. Indigenous peoples, youth, scientists, and other members of civil society who were present were barred from observing negotiations. Others gathered in protest, in the streets of Glasgow and around the world.

We don’t yet know how all the outcomes at COP will reverberate at a more local level. But a comparison with the Road to Resilience shows us where some of Canada’s commitments are still lacking, whether in ambition or in missing the opportunity to pair emission reductions with social benefits and community development.

As the satirical climate film Don’t Look Up points out, it is ridiculous to ask regular citizens to “launch their own missile strikes” to take out the asteroid of climate change. We are relying on world leaders (and political leaders in Manitoba) to do that (and not say they are launching missile strikes when they are actually shooting bb guns). At the same time, climate change is (thankfully) not actually an asteroid, and there will never be a point at which it is “the end.” We should never allow ourselves to take comfort in hopelessness because we think it is too late or we are too powerless, but continue to advocate, to organize, and to implement solutions at every level.